END_OF_DOCUMENT_TOKEN_TO_BE_REPLACED

The 2014 VMAs aired last night (8.24) and my overall thought of the show is that it was just alright. The camera views that the VMAs had online really made the show. Celebrities can claim there’s no shade, but their faces said otherwise. There really weren’t that many celebrities in attendance and the layout of the stage annoys me. I like the traditional stage of the stage then the audience in rows. I don’t like the whole abstract stage thing. I won’t review every little detail, BUT let’s get into the performances. WARNING — This will be a long post and nothing is in order except for intro and closing.

The show opened with a triple performance from Ariana Grande, Nicki Minaj, and Jessie J. Ariana came out and did ‘Break Free’ and she sounded great. She later took home the award for Best Female Pop Video. Then Nicki Minaj came out and performed ‘Anaconda’ and none of the celebs in attendance looked impressed and neither was I. Switch to Jessie J coming out in an ensemble similar to what she wore in the ‘Bang Bang’ video (CLICK HERE for my review) and she sounded pretty good.. Here comes Nicki Minaj holding her dress together. She didn’t have enough time to get it zipped. It could’ve been a better ending had he dress been zipped and Jessie J didn’t seem to be too pleased with the performance based on the backstage cam. Nicki’s outfit for ‘Anaconda’ should’ve just been cute shorts without the fishnets because she would’ve been able to get changed faster.

Moving on to Taylor Swift, her song, ‘Shake It Off’ is cute (CLICK HERE for my review), but no one seemed to be amazed by her performance either. Taylor has done better and it was just a bit off. Like I know she’s stepping out and doing something different, but she’s had better performances. Another bore for me. Maroon 5 performed ‘Maps’ elsewhere and it was another ‘alright’ performance for me. Be on the lookout for my review of their new track, ‘Animals’, going live this week. Sam Smith performed ‘Stay With Me’ and I love his voice. I didn’t expect his performance to be a big production. (CLICK HERE for my review of In The Lonely Hour).

Usher performed his latest single, ‘She Came To Give It To You’ (CLICK HERE for my track review). I was really hoping he would’ve done a medley or ‘Good Kisser’. Although I love the track I just wanted to see something else. Nicki came back out in a white ensemble and was twerking on Usher. The performance was decent and kudos to Usher for not sounding winded. Be on the lookout for my review on his new single, ‘Believe Me’ going live this week. 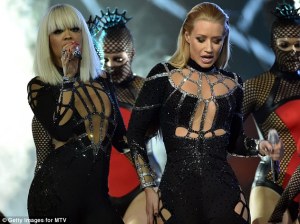 Iggy Azalea had my second favorite performance of the night as she performed along side Rita Ora who SANG and they both looked great in those matching one pieces. Iggy was NOT lip rapping she was going full out. I love how she was in her element. She looked great on the red carpet, great on stage, and great in her second look of the night. Kudos to Iggy. Unfortunately she didn’t take home a moon man for ‘Fancy’.

Lastly, Queen Bey came out an performed her entire self-titled album. The way that she was able to move from song to song was amazing. I wasn’t a huge fan of her outfit, but I love that she took a chance and did something she hadn’t done before. Everyone in attendance was jamming along and her daughter Blue Ivy was turnt up doing her dance to ‘Flawless’. Beyoncé is one of the greatest performers of all time as she pours her heart out on the stage every time she touches it. After Beyoncé’s performance the show just ended. No goodnight just straight into a replay of the show.

As for who had the best look my pick goes to Jennifer Lopez. For her to be 45. Worst dressed definitely goes to Katy Perry and Riff Raff for their horrible tribute to denim. It was horrible when Justin & Britney did it and it was even worse for them to recreate it.  Iggy Azalea looked great and as great as Amber Rose looked in her dress, I think it was a bit trashy for the VMAs. I wasn’t a fan of Kim K.’s look and she looked bored to be there. Rita Ora looked great in the red dress that was worn by Rihanna in a different color previously. Taylor Swift should’ve worn something else. That one piece did her body no justice. Nicki looked cute in her leopard dress. Major step up from what she looked liked at the 2012 VMAs. She looked human. My fav couple on the carpet was Jason Derulo and Jordin Sparks. I love those two together and they looked great in coordinating white outfits.

As for the winners I’m not sure if the winners are chosen based off the popularity of the song or the actual video. Ariana Grande won for Best Pop Video, but there was nothing special about ‘Problem’. I think ‘Fancy’ was better conceptually than that. Miley Cyrus won Video of the Year for ‘Wrecking Ball’ and while it was a beautiful song, the video had it’s raunchy moments. Great song though. Kudos to Miley for allowing the former homeless teen to share his story and share the message of the foundation, ‘My Friend’s Place’.

Overall it was bleh. People compare the MTV VMAs to the BET Awards and I must say that they both have gone downhill. Award shows are not like they used to be, artists do not show up and support. If artists don’t show up to the Grammy’s, the mecca of music awards, why would they show up to basic award shows? For full list of winners CLICK HERE.