Meghan Trainor has released another single, Lips are Movin’, and in its official release she has also announced her debut album title, tracklist, and release date.

The album will be released at the top of 2015, January 13th to be exact. It is available for preorder on both iTunes and Amazon.

The title (no pun intended) is the same as her EP, Title. CLICK HERE for that review. It also features all four songs from her EP: ‘All About That Bass,’ ‘Title’, ‘Dear Future Husband’, and ‘Close Your Eyes’. The full tracklist is below.

Expect an album review for this one.

Meghan Trainor‘s, ‘All About That Bass’ has made it’s way to mainstream and the top of the charts and while her buzz is hot she’s released her EP, Title. The EP was released September 9th via Epic Records and is available on Amazon & iTunes.

From ‘All About That Bass’, it’s clear that Meghan’s music style is that of the 60s; very Doo-Wop. Throughout the four tracks she’s singing about how she shouldn’t have to compromise over her size and how a man should treat her. Track-by-track review shall we:

Overall I think this is a great introduction to her sound as she stays true and ‘All About That Bass’ is not a phase. She’s really singing about the same thing, but I really enjoyed all four tracks. I can’t wait to see where her career goes.

Listen to the EP below (via Spotify): 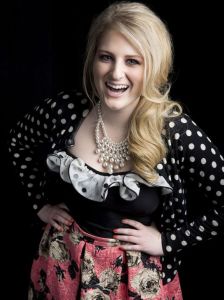 After weeks of surging up the Billboard Hot 100, Meghan Trainor has taken the #1 spot with her platinum track, ‘All About That Bass’. After Taylor Swift‘s 2 week  reign for ‘Shake It Off’, ‘All About That Bass’ takes over the spot after spending 9 weeks on the chart. She’s also released new music as well with her EP, Title. Of course her smash is featured along with three other tracks. That review will come soon.

Over on the Billboard 200 Maroon 5 scores their 2nd #1 album with their 5th studio album, V (CLICK HERE for review). The album sold 164,000 copies in its first week making sales less than its previous effort, Overexposed.

Be sure to CLICK the links. Until next week…

Welcome to another edition of This Week In Music. Be sure to click the links below to check out my posts for this week:

Now let’s get into chart news. The #1 album in the country is, Guardians of The Galaxy: Awesome Mix Vol.1. Sam Smith and 5 Seconds of Summer hold tight in the Top 10 with their albums as well as Frozen although its quickly declining.

As for the Hot 100, Magic!’s ‘Rude’ still holds the #1 spot. Meghan Trainor shoots up from 8-4 with ‘All About That Bass’ looking to dethrone Magic! As for new appearances on the Hot 100, Charlie XCXs ‘Boom Clap’. 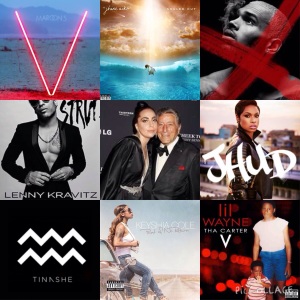 There’s a lot of albums coming out this fall so here are dates that have been confirmed thus far:

When I first saw the “All About That Bass” video on Facebook I was intrigued from the start from the colorful video and the message. I instantly wanted to hear more, but unfortunately all she had on her YouTube was her debut track. Meghan Trainor is a signer-songwriter from Massachusetts signed to Epic Records. The track has soared 20 spots into the top 10 of the Hot 100, from 28-8, which is pretty decent considering in just five weeks its sold over 350,000 copies.

Check out her colorful, size doesn’t matter video below (directed by Fatima Robinson):

As for who else is on the Hot 100, Magic! still holds tight for the 4th week with ‘Rude’. Sam Smith is vying for the number one spot as ‘Stay With Me’ moves up a spot to #2. In at #3 is Iggy Azalea’s, ‘Fancy’ which swapped spots with Sam Smith with in a week as it slowly moves down the charts. No worries, it’s still sold over 3 million copies, and counting. Nico and Vinz hold tight at #4 with ‘Am I Wrong’ and in at #5 is Ariana Grande’s, ‘Problem’.

Jessie J’s latest single, ‘Bang Bang’, featuring Ariana Grande and Nicki Minaj has debuted at #6 and in at #7 is Maroon 5’s ‘Maps’. As mentioned above, ‘All About That Bass’ is in at #8, Sia’s ‘Chandelier’ is in at #9, and rounding off the top 10 is Disclosure’s ‘Latch’.

Can Meghan Trainor hold momentum and soar higher into the top 10?

Will Sam Smith finally get a taste of the top spot with ‘Stay With Me?’

Only time will tell. Until next time …