Maroon 5’s lead single to their 5th studio album, V, has been remixed. The first remix features Big Sean and a dub step type beat. From first listen I didn’t really think I’d like it, but it works. It has that hard hitting bass feel that sounds a lot like what’s on urban radio. It slows down to that dragging beat, then moves back into that club beat style. Overall, I like it. Listen below: 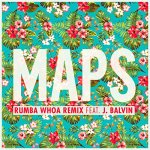 Then there is the Rhumba Whoa Remix which is more true to the original beat. There’s really nothing different about it, they sound EXACTLY the same. The only noticeable difference is that ‘you’ and ‘do’ is skipped instead of sung repetitively. The J. Balvin feature which comes in at 2:34. Compared to the other remix, eh, I’m not really a fan. It did nothing for me.

Click the links below for the Maroon 5 features thus far on MMF: