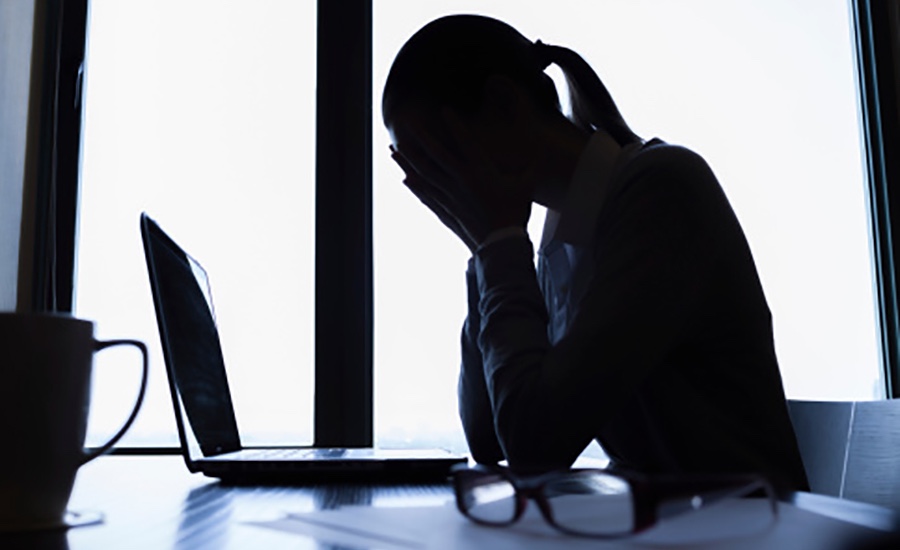 In September it will be a year since I’ve resigned from my full-time, salaried corporate job. While I’m freelancing and doing other things now and my pay fluctuates I don’t regret my decision. Why? Imagine walking into a place everyday that you couldn’t escape because it was your means of survival. You get a sick feeling each and every time you arrive, yet you stick around hoping it’ll change. Could it be workplace depression? Is your job actually a trigger? Is this possible?

When it comes to anxiety and depression, I’m no stranger to discussing it here on my blog. It’s nothing to be ashamed of, and to be honest, it should be discussed more often. You know why it’s usually swept under the rug? People think it’s normal to feel this way. It’s okay to walk in a place and feel sad and uninspired. Just get through the day. There’s a paycheck at the end of the tunnel.

Yeah, that’s bullshit. I said it. Let’s be clear –

NO PAYCHECK IS WORTH SACRIFICING YOUR MENTAL HEALTH!

What good are you really bringing to the table when your mind is so wrapped around the fact that you don’t want to be there in the first place. You’ve become a robot.

Now, I understand that situations are differ t for everyone. Sometimes, you have to take the job you get and not get upset. Still, if your job is physically making you sick, it’s time to re-evaluate your role. Is it really worth it? Is there something else out there for me? You may think, you’ve worked so hard to get to this position. Especially in a corporate setting. Still, if you could get that job, what makes you think you can’t get another? Hell, in this day in age, create your own lane.

I was inspired to write this post from a Podcast I listened to. If you’ve ever watched professional wrestling you’ve probably heard of WWF/E, ECW, ECW, and others. WWE is like the Mecca of professional wrestling. More so because they have the means and connections to really elevate someone’s career. So as an indie wrestler, the goal is always WWE. If you get there, you’ve made it.

One of my favorite wrestlers who went by the name of Dean Ambrose, recently left the company and went back to his original wrestling name, Jon Moxley. While he jumped shipped to a newer promotion, the issue is bigger than that. He left “greener pastures” and a stable paycheck for what? His sanity! He mentioned in the podcast that he felt sick, physically sick going to work. Creatively he wasn’t going anywhere. The company was making him what they wanted him to be and not letting him be who he truly was. Most importantly, he felt he was compromising his individuality/morality for storylines.

Let me add another tidbit here. While professional wrestling has a lot of entertainment involved, there’s a lot of the personal lives of the wrestlers that are put into storylines. Most commonly, marriage is thrown into promos. Recently, they took the character Roman Reigns (Joe A’noai) and added his cancer to the storyline. Having him announce that his cancer had returned and he would have to take a leave of absence was on thing. To use it as fuel for a storyline, is another. There goes the compromising your morality part. Mickey, Ambrose at the time, was a part of this storyline. Roman is his friend, they were a trio when they first came in. To have an emotional time like that exploited for a storyline, that’s never cool. Never will be.

So that’s what ignited me to share this lost. Yeah, you may not know the ins and outs of professional wrestling and the superstars at that. I do know that many of you can relate to feeling stuck in the workplace creatively, mentally, physically, and having a gut wrenching, sickening feeling every time you walk through the door.

Personally, this has happened to me on two occasions. I worked at a daycare for 6 years and near the end, I was miserable. I’ve always loved working with kids, but my coworkers were another story. It was a lot of bullying going on, yes with adults, and it was so much negative energy. It was ridiculous. I knew it was time to go when I didn’t even want to do my job anymore. So, I quit. I quit without a backup plan. I quit with no other job on the table. I quit for my sanity.

Eventually I found something new, and that led me to my first “big girl job.” I was happy to have that job. It was my “I made it” moment. Creatively, at first, I was able to use my skills and knowledge. As time went on, things drastically changed. While I had built a relationship with me boss and coworkers, that didn’t take away from the fact that I wasn’t getting shit done. I wasn’t excelling at a level I knew I could. Ideas I had were turned away. That’s expected to happen right? We can’t have our way at everything in life. It was bigger than that. My role was a Content Specialist. It was my job to push the envelope and think outside the box.

All this stress came to a head when I began to have panic attacks at work. It’s hard to be creative when you’re not allowed to be creative. My brain just wouldn’t function. I couldn’t stay focused on the task at hand. My commute was around 45 minutes there and back every day and I hated it. I hated pulling into the parking lot. I hated unlocking the door. I hated sitting at my desk. I was miserable and my job, something I thought would turn into my career, was now a trigger.

So, what did I do? Well for one, I ended up having to go into the hospital for suicidal thoughts. Yes, it was that bad. No, I’m not exaggerating. I even tried to go back part time. It didn’t help. I decided it would be best for my sanity to resign and not be a hindrance to the company moving forward. Best decision I made.

Call me a quitter, I know I’m not. I will do anything to keep my sanity. Even if that means babysitting and freelancing in the meantime.

Talk about feeling better once you write out how you feel. Don’t let anything in life make you feel you have to sacrifice your mental state. A job/career is never, NEVER worth it. You can’t enjoy that paycheck if you work yourself to death. We have to not just physically take care of ourselves, mentally we have to as well. I don’t regret my decisions. It is refreshing to know that even people in these jobs many would dream of working at feel the same way. If they can leave and find something else, why can’t you?