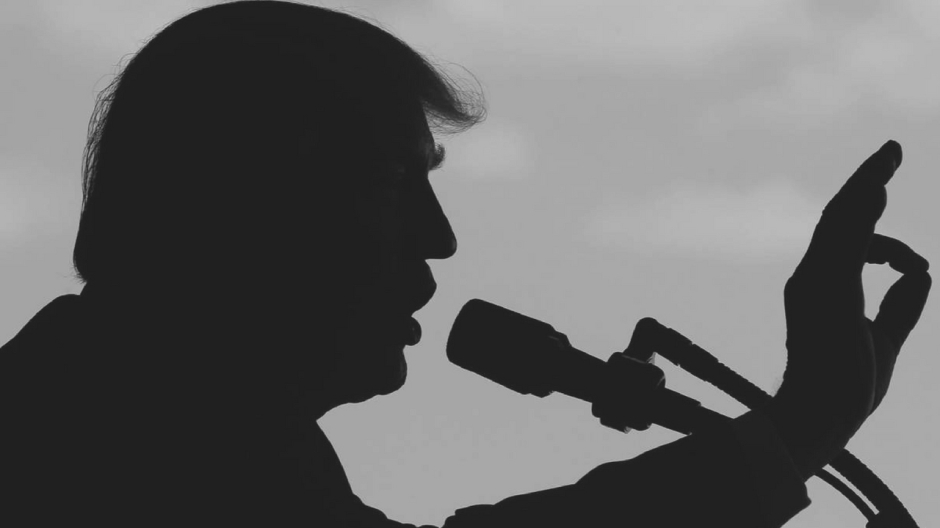 It has been a whirlwind in the media with politics. The threats against other countries, the fight for healthcare, the rallies dividing citizens further a part, and most importantly the montage of tweets from the POTUS. I have a platform where I can share my thoughts. The joy of freedom of speech. I may be a football fan, but first and foremost I am a black woman in the United States of America. I AM BLACK! I have given my take on the Kaepernick situation that seems to be getting bigger and bigger by the day. Could the POTUS have taken things too far with his latest rant of comments?

I don’t know whether or not I should tackle the POTUS’ latest attack on the NFL or the NBA. Hell, let’s start with the NFL. The POTUS commented at a rally in Alabama on Friday about football players not standing for the national anthem before games.

Peacefully protesting should never be an issue in this country. When the white supremacists in Charlottesville, VA decided to attack black people out of nowhere he was very calm about the situation. He said it was “violence” on both sides. What they did was not disrespectful to this country at all. Here we have football players that are taking a stance on the platform that they have and they’re called SOBs. So, violent protesters get “calm” POTUS. They’re just fighting for their rights? Yet, peaceful protests by athletes results in name calling? Where is the logic in that?

To have the POTUS name call citizens as publicly as he did and to go on Twitter and pin point people as well takes things too far. Why is there not a limit to this? Why does it just so happen that the targets of his “anger” are black men? To be honest, he doesn’t have a filter. If you’re not for him, you’re against him. He’ll stop in the middle of whatever he is doing to throw a tweet. A tweet as if he’s still on The Apprentice shouting “You’re Fired!” Tweeting is one thing, but majority of the POTUS’ tweets are unecessary, inappropriate, and frankly irrelevant when there are more prevalent issues at hand. He has the U.S. to run, the entities within have the right to govern how they please. Him yelling and screaming to get a rile out of people to fire NFL players that “disrespect” this country does what exactly?

Okay, let’s say the NFL were to act on that. Majority of the NFL is filled with black men. All of your favorites that you put on your fantasy team, black men. Whether it’s Odell Beckham Jr. on the Giants or Antonio Brown on the Steelers, black men. Oh, Cowboys fans? What about Ezekiel Elliot or Dez Bryant? Black men. Take them out of the equation. Tell me how is the NFL supposed to make money? Black players are prized athletes that make all the coins. They make the big plays. There would still be a league, but how effective would it be? Football players that do not understand why black players are upset with the POTUS are either clueless or simply could care less.

NFL Commissioner, Roger Goodell, released a statement following the comments made by the POTUS. The POTUS’ response? Well, I’m not surprised.

As for the NBA, Stephen Curry of the 2017 NBA Champs Golden State Warriors, said he didn’t want to go to the White House. POTUS has a response for that as well among other things. 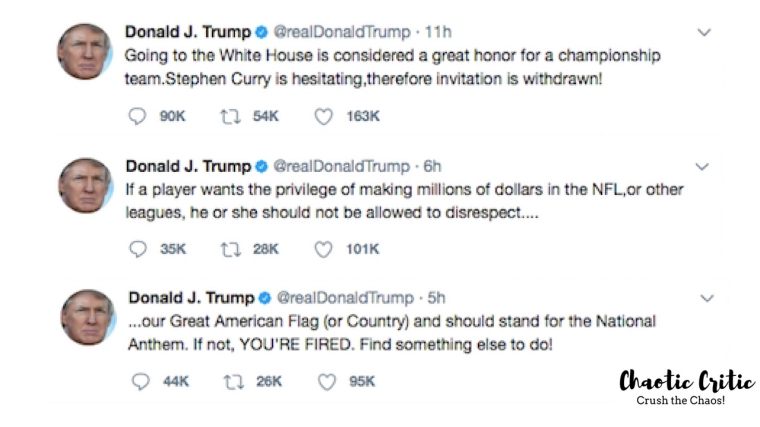 Athletes and personnel have taken to social media, specifically Twitter, to give take their stance on the situation at hand. Despite these athletes, both NFL and NBA, being on separate teams; colleagues are colleagues.

LeBron James went on to explain his tweet and the frustration he has. He made a point in saying that the POTUS was now using sports as platform to further divide the one thing that always seems to bring everyone together. I would be more concerned if athletes did not use their platform.

What was once a privilege and honor to visit the White House and meet the President has now turned into a race war. For those that think not, think again. Why go and visit someone that advocates for everything you do not believe in. He publicly stands and applauds violence. It’s as if black people are automatically violent, but pushing and shoving a black woman out of a rally is somehow right. Putting race aside, anyone that is not seen as an “American” by the standards of the POTUS is ridiculed. It’s a struggle to be under leadership that says do not disrespect the country yet does it deliberately constantly causing further division.

This Sound Off series discusses current events that others may feel uncomfortable to discuss. I will use my platform to discuss what matters to me any chance I get. Agree to disagree.

Check out the entire Sound Off series here!