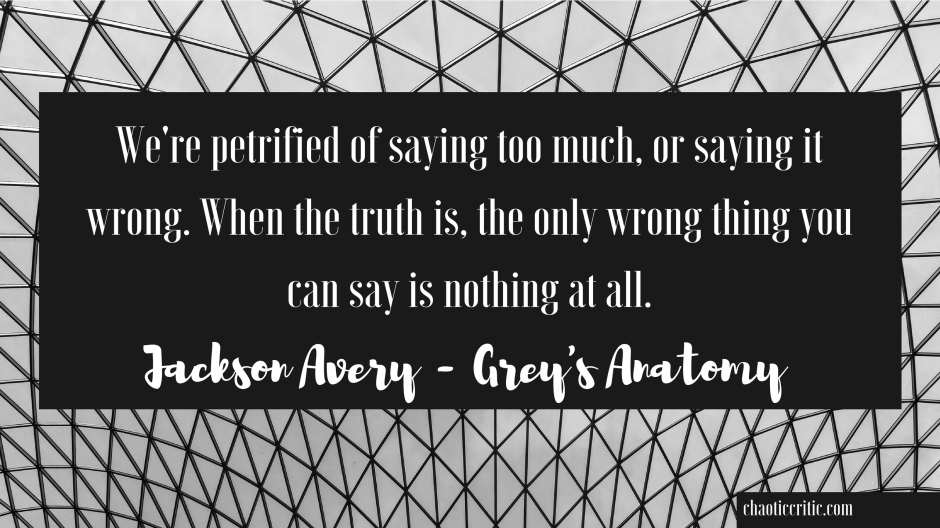 I was sucked into the latest episode of Grey’s Anatomy this past Thursday. While I’m not completely in tune with the show I have a gist of it plus the characters. This episode in particular features Jackson Avery, played by Jesse Williams, as he travelled to do a surgery on a girl and in the midst he met his long lost father for the first time. While I found the episode entertaining and engaging, it’s what he said at the end that really stuck.

We’re petrified of saying too much, or saying it wrong. When the truth is, the only wrong thing you can say is nothing at all.

Why are we so afraid? Why are we so afraid to say how we really feel? Why is it that we can say certain things to some, but not to others? Does it have to with status? “If you don’t have something nice to say don’t say anything at all,” is a mantra I’ve heard all my life. “Silence is golden,” but is it really? Do you have to keep your mouth shut in fear of the reaction? Then there’s “talk is cheap.” That’s where your “actions speak louder than words.” The sayings could go on and on.

I often find myself holding my tongue in certain situations while I pride myself on being a person to say what others won’t. Times that I should speak up, I don’t. I let the opportunity pass right by me. I wait for the other person to say something. Why? I’m afraid of the response, the rejection, the outcome that I don’t want. On the other hand, sometimes when I should keep my mouth shut, my mouth runs away from me. Why are the circumstances different? More and likely because I don’t care. I haven’t invested my thoughts into that particular lack luster conversation. For the other times, the lost opportunities, I’m too busy trying to gather my thoughts  in an attempt to say the right thing. I’m too busy overthinking, not wanting to be wrong. I’m too busy thinking of failure before I even had the chance to say hello.

Is this something that I can change? Sometimes the thought of talking to someone about something important, just the thought, gives me anxiety. I try to push rings off as long as I can, but all that does is heighten the anxiousness inside of me and my words are even more jumbled then ever before. On top of that, I don’t feel like my tone is strong enough when I do speak and I sound as if I’m going to cry. You may not really hear yourself when you weak, but when I’m anxious and my anxiety is on another level, I hear every single word out of my mouth loud an d clear. From how I enunciate my words to the emotion in my tone.

An example of this is being afraid to ask for a job promotion. You’re going above and beyond and want to be paid what you’re worth, yet you’re afraid to ask your boss for that promotion. You’re afraid you’ll be told a flat out no. You’re afraid that in asking for that raise/promotion, you’ll be first on the chopping block. You sit and ponder whether or not you should ask. It’s a simple question that results in a simple yes or no regardless of how complex the response may be. If you wanted a refund on something you purchased you wouldn’t be afraid to return it. Or, if there was a mistake on your receipt you wouldn’t be afraid to correct the cashier. Why is this situation any different?

I do not want to live in fear, especially fear to speak my mind. Like most things in life, it’s about finding a balance. When I’m comfortable around someone, I’m a chatter box. Yet, when I’m unfamiliar I’m silent. I’ll take in everything around me from color on the walls to what everyone else is wearing, all while simultaneously making a mental note of the conversation at hand. It’s a gift and a curse, but sometimes in being silent, you miss out. The quote just spoke so much to me as I find myself, especially in unfamiliar / uncomfortable situations not being myself. Call me socially awkward, but the struggle is oh so real.