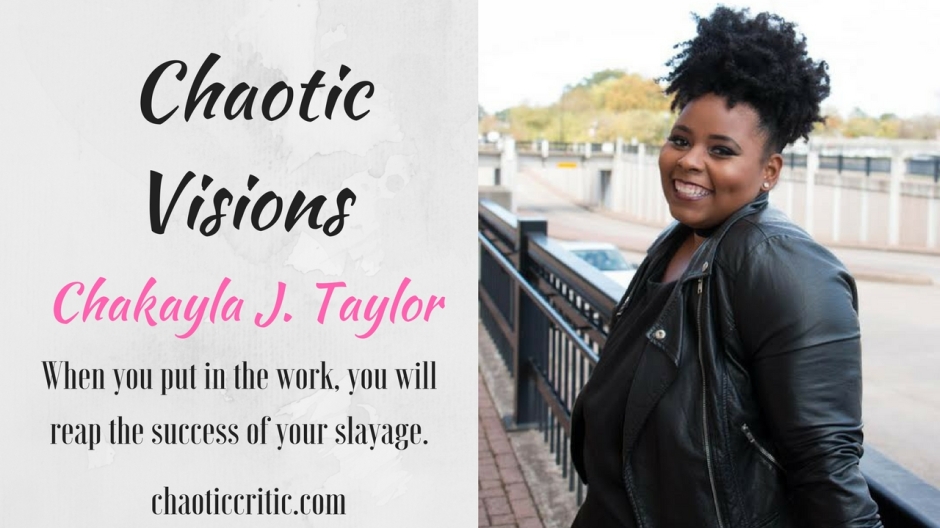 Welcome to another edition of Chaotic Visions. In this series I’ll be showcasing amazing female entrepreneurs, their brands, and their roads to success.

This edition is very special as I was able to chat with my childhood friend, Chakayla J. Taylor, about her amazing brand. Chakayla is a Certified Goal Success Life Coach for women entrepreneurs, hungry to turn their ideas into irresistible success! In between educating, personal branding, and a social media takeover, she drops, what she likes to call gems, on the daily. The talk we had was filled with plenty of them.

I caught Chakayla multitasking as she was juggling her son on her hip, headphones plugged in to chat with me, and gearing up for one of her infamous Instagram Live sessions.

When you put in the work, you will reap the success of your slayage.

That’s what you see when you head over to her website, Chakayla J. Taylor. Although we hadn’t seen or spoke to  each other in years, the conversation was so organic, and we were able to connect like we had so many years ago. I’ve been following Chakayla since her blogging beginnings of ClassicRawBeauty. We both began blogging around the same time back in 2010, although I was covering music and she was into fashion. She then moved on to Stylishly Decadent, a fashion/food blog, and now she’s on to her latest venture, Chakayla J. Taylor. As for me, I transition from MusicMovingForward to Chaotic Critic.

While style and fashion were always a part of her initial vision, ClassicRawBeauty, it was beginning to become a chore. In moving forward as a brand she did not want to have that feeling towards something she was passionate about. She left her 9-5 that she was able to land after Undergrad, moved to Dallas, and took the leap of faith to create a lucrative brand of her own. In creating Chakayla J. Taylor (CJT), she began to build a community for woman who felt outcasted. From there her followers, that she refers to as her tribe, flourished.

With all that she has going on, just how does she stay organized?

I am very methodical so I have to write things down, digital and written form.

How does Chakayla define success?

“Success is what you make it. So what are you doing to do with it when you have it?”

As the saying goes, reading is fundamental. Regardless of whether you’re reading for pleasure or requirement, you need to read. Chakayla recommends that in reading it sets you a part from the pack. That’s pretty obvious in the fact that when you’re reading a little bit of everything your conversations become more in depth because you know more than just the average. You’re more insightful and can connect with people on levels that you were unable to before.

What’s on her reading wishlist? Grit: The Power of Passion and Perseverance by Angela Duckwort and You Can’t Touch my Hair by Phoebe Robinson.

Knowing your expertise is so important. As a blogger, I’ve found that I have issues in trying to figure out just what I’m good at. Then again, I like to cover so much information that I look past just what I’m good at. As I continue to create content, I’ve realized that I’m an informational blogger. Chakayla went from a fashion blogger to a lifestyle/food blogger, eventually transforming and creating Chakayla J. Taylor. Throughout all of those transitions, she was able to build on the fact that she was a resource. As a fashion blogger she was a resource to finding fashion for low  prices and maximizing your wardrobe. Now she’s a resource to amazing female entrepreneurs helping them take their brands to the next level.

Know your expertise and really know it. You can’t be good at everything. Don’t perpetrate. 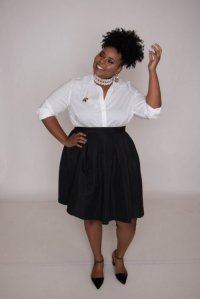 As a resource you invest in your audience without monetary means. Chakalya’s followers are her tribe. In becoming personable with them, she has been able to build a substantial following and turn that into a business. She’s built a bond and her tribe/community trusts her judgement and believes in what she has to say. Her words hold value. There’s nothing wrong with sharing your keys to success. I mean, if DJ Khaled can, why can’t everyone else?

Her sacrifice as an entrepreneur? Friendship

You’re going to go through a time in your life where to be successful you have to learn you.

Best part of being an entrepreneur?

I can create what I want to create. I can build my own dream. I am the master strategist of my brand.

Chakayla’s first mentor was her mother and as someone who has lost their mom, Chakayla and I connect on another level. Her mother raised her to be the woman that she is today. She carries with her some advice her mother had given her as she treks through her career.

She noted that there are so many people that will try to discredit you. She briefly shared a story of her college days where people thought she was crazy because she wanted to wear her natural hair. Why would that not be normal? Hair is just hair, right? Instead of letting that shake or define her, she continues to learn and manifest from the advice she’s been given by her mother and countless others over the years.

Aside from being a girl boss and a mommy, Chakayla is your typical around the way girl. She’s currently loving Kehlani’s ‘Distraction’ and like many others, she’s obsessed with Solange’s A Seat at the Table. Her favorite track? ‘Don’t Touch my Hair.’

I don’t believe in resolutions anymore. They die!

While the brand Chakayla J. Taylor will remain, her mission will more and likely change. As of 2017 she’s had multiple Blog Like a Boss brunches, she has a new venture in Brand It Like a Boss, plus countless FREE Instagram live sessions. Her lineup for the remainder of 2017, which she refers to as the #GlowUp, will be nothing short of remarkable.

To keep up to date be sure to check out the Chakayla J. Taylor website in addition to her Instagram @chakaylajtaylor.