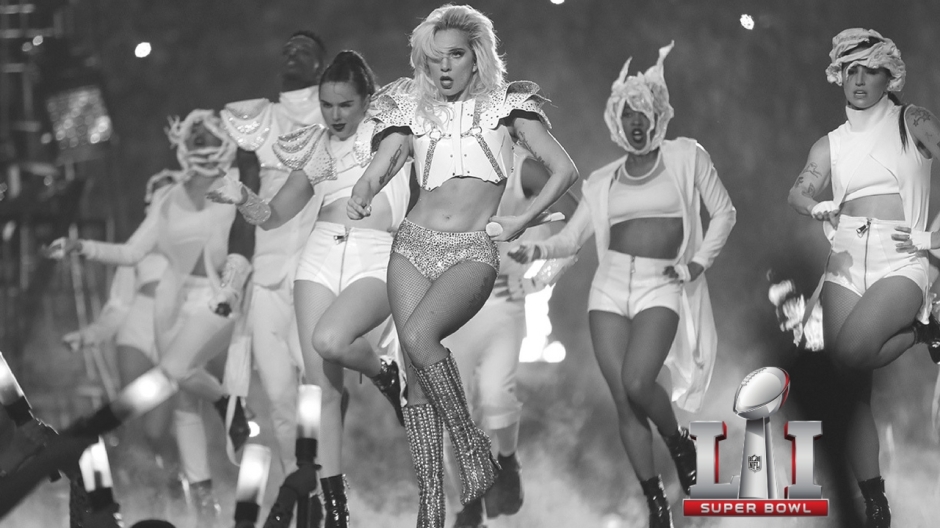 Lady Gaga headlined this years Pepsi Halftime show at Superbowl 51. Now when they announced that Lady Gaga would be headlining, I was excited because not only does Gaga have hits, but she can perform her ass off. As for this performance, well it was a “slay no slay” for me.

Gaga started of her set by singing ‘God Bless America.’ She then went into a medley of:

Now I love Gaga’s music, but this performance was just eh for me. Now I loved the theatrics. That’s what Gaga is known for. She started off her set at the top of the stadium, that they opened specifically for her. Then she ended up jumping down and doing all these acrobatic moves. Her outfit wasn’t nothing I haven’t seen before since bedazzled leotards are IT.

My main problem with this performance was the segue in between songs and the choreography was bland. I felt that a lot of the transitions were just hard stops. Like there was no smooth segue from one song to another.

The thing with performing at the Super Bowl is that, for one, viewers expect you to a medley of your hits. Plus when you’re doing a medley you have to pick and choose what song will get more time than others. Number two, time is not on your side. Three, it’s the SUPER BOWL, of course it’s go big or go home. With all that in play, I know that Gaga wanted to go above and beyond as much as she could which is why she was all over the place in her performance. When I say all over the place, I don’t mean off key or missing a dance step. She just moved around which she said in an interview that she wanted to use all of the stage that she could. She did just that.

Maybe, just maybe, I was expecting too much from Gaga, but I mean come on, it’s GAGA! I will say that I was not expecting for her to do ‘Telephone.’ Out of all her songs, I wasn’t expecting that. Plus, for anyone that was kind of hoping Beyoncé would pop out, yeah, right. They’ve never performed that song live, for one, and Gaga was not about to have Bey pop up in her slot. Plus Queen Bey is preggers, but still in all, pregnancy no pregnancy it wasn’t happening. I honestly could’ve gone without her singing ‘Telephone’ all together and doing something else.

My favorite part would definitely be the ending when she did ‘Bad Romance.’ That was the cleanest transition to go from ‘Million Reasons’ into ‘Bad Romance.’ Whoever did that segue and let the music build and change did great. I didn’t feel or notice that in any of her other transitions. This is where she ditched the leotard, kept the bedazzled buttons and added in shoulder pads. Super cute look. Plus to end her entire set she dropped the mike and jumped off just like she jumped in. Well, well Gaga.

Overall the performance was decent, but again maybe I was expecting too much. I didn’t have the same energy I had prior to her performance as I did watching it. After looking on social media a lot of people seemed to enjoy it. It was way better than Katy Perry‘s that’s for sure. Lady Gaga as a performer is phenomenal and regardless of how this performance was there’s no doubt that she was singing LIVE. That voice is amazing.

Oh yeah, congrats to the Patriots (insert side eye emoji). Tom Brady is the greatest quarterback of all time. His 5 trophies speak for themselves. Personally, as a Steelers fan, the only organization I hate more than the Ravens are the Patriots. It is what it is. Congrats. Now let the anxiety of the football season cease until the fall.