Cheers to a bonus blog post and Happy early Thanksgiving. I haven’t done a Sound Off since the election, but be sure to check that one out here. That’s one of my main goals of 2017 is to make this series more regular. At least a few a month. Ok, realistically, at least one a month. A few would be great though.

From the title you can see that I’ll be talking about Kanye, but on a different level. Let’s get real.

During Kanye’s last show on his Pablo tour, he called out Jay-Z, Beyoncè, & Drake, abruptly stopped the show, cancelled the rest of the tour, and to top it off, he’s been hospitalized. So is Kanye really crazy like everyone says? What the hell is wrong with him? Why is he cheating his fans who paid to see a show not a rant?

First off, let me be the first to say that Kanye is far from crazy. He’s quite intellectual and a lot of how he feels is put in his music. The music that, at this point, people just may not get. People just may not understand, but he does, and as an artist that’s all that matters. I mean, he has stans of fans that get it. Why else would they pay for his show or buy his merchandise? Some may argue that his fans are too blind to see that he’s crazy. Yet, he has support. Despite the negative media, he has support. People are ON HIS SIDE. (insert Tyra Banks screaming, “We were rooting for you!) Is that not enough?

I meant to do a post like this back in October in reference to Kid Cudi, but I never got around to it. Newsflash, in case you missed it, back in October Kid Cudi admitted himself into a rehab for depression and suicidal urges. 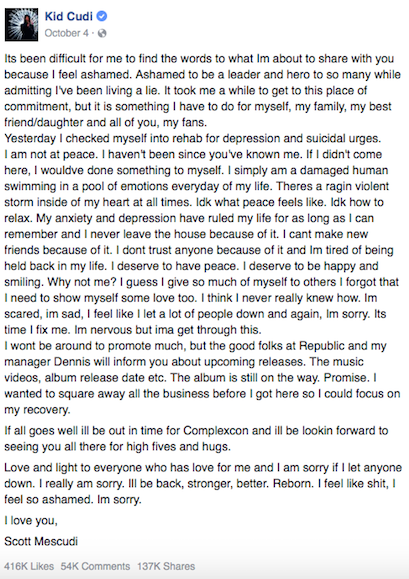 I recently read a tweet that I completely agree with in regards to the current state of Kanye. It was along the lines of Kanye’s rant coinciding with the loss of his mother. It’s that time of year as his mother passed in November 2007. Honestly, regardless of the month she passed, losing her hits harder during the holiday season in general. On top of that he’s juggling his marriage, being a father, being an artist. He could just be trying to find himself again which happens when you have so many different roles.

The expectation of perfection doesn’t allow you to deal with how you feel.

In the African-American culture, there’s really no such thing as depression. As someone who deals with depression/anxiety, I understand where Kanye is coming from, but some people don’t and never will.

“We all have issues.”

“What do you mean you’re depressed?”

“What’s wrong with you?”

How can someone like Kanye not be happy when you have all the money in the world? What could he possibly be ranting about?

It goes deeper than that. It could very well be that Kanye is grieving over his mother and his rant and calling out people, such as Jay-Z, is his way of dealing with it. Why Jay-Z? Well for Kanye who considers Jay-Z a friend and considers him as a big brother, with everything going on he just may feel deserted. When you think people are in your corner and when starts hits the fan and they’re M.I.A., you’d feel some type of way too.

Todd Tucker, husband of RHOA Kandi Burruss, gave his take on Kany via Instagram. He could not have written it any better.

I’m praying for Kanye as only those who have lost their moms would understand the pain, loneliness, confusion, lost of love for life, blame, and many other feeling that come with it. I’m 2 yrs in and I’m lost everyday. I pray that he gets the help he needs! Money, cars, clothes, Jewelry and other bullshit don’t fix this shit. Get better Kanye we need you.

There’s no worse feeling than feeling lost. He has it all to the public eye. A gorgeous wife, gorgeous children, an amazing career. What more could he possibly want? Can he just stop grieving already? Yeah, I went there.

If you really look back at the history of Kanye’s tirades, they all came after his mom. Not saying that they may not have come to light eventually, but his sporadic actions really began with his infamous Taylor Swift diss at the 2009 VMAs.

Instead of laughing and calling him crazy, pray for him and others like him. Depression is real whether you want to believe it or not.

Depression can occur to anyone, at any age, and to people of any race or ethnic group.  Depression is never a “normal” part of life, no matter what your age, gender or health situation. It causes people to lose pleasure from daily life, can complicate other medical conditions, and can even be serious enough to lead to suicide.

People that suffer from it need to be uplifted. Some may say well they don’t want to help themselves. That all ties into what they’re feeling. Depression can weigh you down to the point of wanting to do absolutely nothing. Hence why depression leads to suicidal thoughts. You feel worthless. Nothing brings you joy. There’s nothing to live for.

Not to make excuses, but clearly Kanye has some issues that he needs to work out. His personal issues have been making headlines for years. He may not have dealt with the loss of his mother and channels his emotions into his music instead. He and his wife Kim have the common ground of losing  a parent and that’s something that Kim could help him with. As someone who has lost a parent, it’s never something you get over. All you can do is learn to deal with it.

Enjoying my Sound Off series? Click HERE to read more!

Anyone else struggling with time management? Here it was just after midnight and I couldn’t fall asleep. My mind was going. I was overwhelmed and when that happens, my anxiety goes from 0-100 .. real quick. I knew something had to change. The issue? I suck at managing my time. No matter how nice it might look on paper, I’m not making the most of my 24 hours. This is where the @jordanpage @funcheaporfree #blockschedule comes in. I sat watching the nearly 30 minute video (might as well make my YouTube rabbit hole time somewhat productive). I then printed out the freebie from the site, grabbed a pencil, and got to work. By the time I fell asleep it was after 3am, but I’m committed to this new system. While I didn’t wake at 7am, and I hit snooze, I was up before 8 so .. baby steps. I give this long spiel to say, start today. Whatever it is you’re avoiding, don’t wait for next week, next Monday, the first of the month, just do it now. Will implementing this block schedule be an overnight success? I doubt it. Will sticking with it and giving it a fair shot help me in the long run? Absolutely!
What’s on your reading list? ———————— I find myself reaching for autobiographies/memoirs and books that cover self help and personal growth. Now time to actually read and not just buy and collect. ———————— Love the addition to this @mjplanner reading printable to track how you feel as you’re reading. Use my code Lakia20 to save a few coins 🙂
Are you one for a running to do list or categorized lists?
Today’s finds for my stash courtesy of @daiso_usa. #instahaul
Need more structure in my day, so giving this @jordanpage @funcheaporfree #blockschedule a shot!
Who else is making mental health a priority this year? —————————— Love the variety that @mjplanner has from therapy notes to a thought record (aka a mental check in). The mood tracker specifically is helping my pin point changes I have throughout the month from anxiety to depression and my energy levels. —————————— Interested in adding this printable to your lineup? Use the code Lakia20 and save 20% 😉
%d bloggers like this: