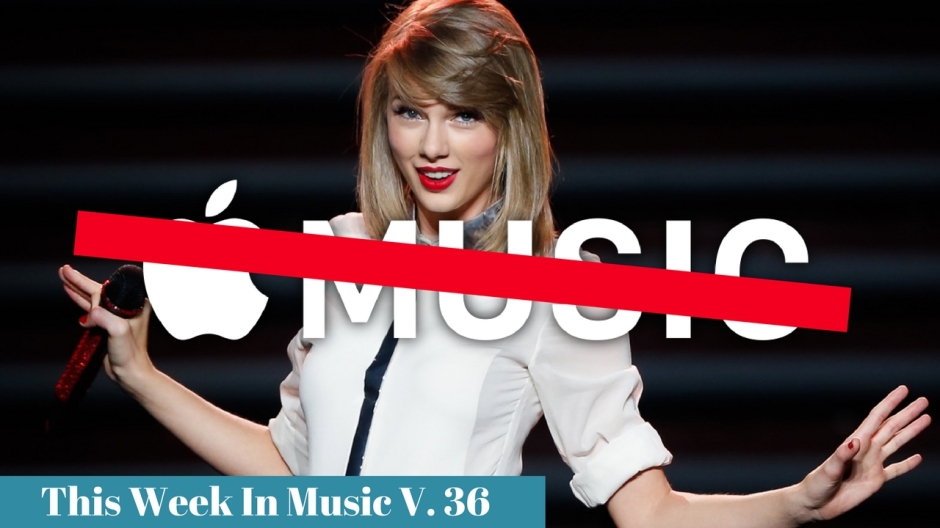 Welcome to another edition of This Week In Music. For those who have not noticed, the blog did go under major changes such as a new name. ChaoticCritic is now the new name for the blog, simply because my posts are BEYOND music. Also be sure to follow me on Instagram @chaoticcritic. So before we get into the weekly music news, here’s what’s been posted this week:

While Taylor Swift sits comfortably at #2 on both the Billboard 200 and Hot 100, she’s not comfortable with Apple Music giving her music for free. Taylor Swift is all for artists getting paid for their music through streaming services which was why she pulled her music from Spotify. As a Spotify customer, that’s a bummer, but her reasoning makes sense.

This is the same for Apple Music. Apple Music will be launching June 30th as a $9.99/month subscription; $15/month for a six person family plan. It features exclusives such as a 24/7 online radio station (Beats 1) along with a social media platform ‘Connect’ which allows artists to share songs and photos with fans. The problem here is that Apple Music will be free for THREE months. Sounds great? Well Taylor is not having it and had this to say in a letter she penned, ‘To Apple, Love Taylor:’

I’m not sure you know that Apple Music will not be paying writers, producers, or artist for those three months. I find it shocking, disappointing, and completely unlike the historically progressive and generous company.

We don’t ask you for free iPhones. Please don’t ask us to provide you with our music for no compensation.

I could not agree with her more. This is why the Grammy Creators Alliance was established to protect the rights of artists. As a consumer it’s great that for $9.99/month, for most subscriptions, you can get access to any artists catalogue you want, at any time. Hell, if you’re a student you can get the price cut in half. From an artist standpoint, it’s great to please your fans, but it’s a slap in the face to have your music taken from you and sold for the profit of others. That’s what the real problem is. It’s about these subscriptions being created, yet no credit is given to the artists. Kudos to Taylor.

There’s a lot of new music on the way. For those that were fans of Disclosure’s collaboration with Sam Smith, rest assured another is on the way. That’s exciting because ‘Latch’ was such a hit and helped to launch the careers of both Disclosure and Sam. Major congrats to Sam. His album, In The Lonely Hour has sold 8 million copies. MAJOR congrats to that.

Lil Wayne fans, the Free Weezy Album, is set to drop the 4th of July. I noted in last weeks edition that Wayne spoke about his deal with Jay Z and here he is following in his footsteps with dropping an album on Independence Day. Jay’s Magna Carta Holy Grail dropped July 4, 2013. That was Jay’s 12th album and here it is 2 years later, Wayne is going to drop is 12th album the same way. The album was supposed to drop in April so will it really be dropping July 4th? How will it sound? Who will be featured? Will more shots be thrown at Cash Money? Can we expect vintage Wayne? I guess we’ll have to wait and see if it really drops.

Trey Songz and Miguel both have new albums on the way. Trey Songz will be rereleasing his album Trigga with the new title Trigga Reloaded. Trigga was released a year ago, July 1st, and Trigga Reloaded will be released June 23rd. Miguel’s 3rd studio album, WILDHEART, is slated to drop June 30th. Be on the lookout for my thoughts on what’s been released so far.