There’s a new music subscription for the public to access, but this time its backed by the stars. Jay-Z announced that he would be relaunching Tidal. Now there’s Spotify which is $9.99/month. Then there’s Beats Music  that’s $9.99/month and allows access for up to three devices. Now when I heard of Tidal I was thinking, great another music subscription. When I saw the price I knew that I wouldn’t want to sign up. $19.99 for a music subscription? What makes it so special? What am I getting in addition to the cheaper alternatives already available? 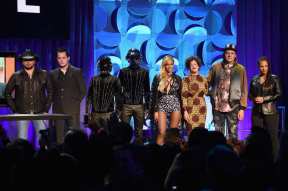 This star-studded announcement that included the likes of: Jay-Z & Beyonce (of course), Kanye West, Usher, J. Cole, Alicia Keys, Rihanna, Nicki Minaj, Madonna, and more. I paid this no mind until Beyoncé released a new single via the site titled,’Die For You .’ How appropriate as it is the 7th wedding anniversary of her and Jay-Z. Click HERE to listen to the track.

When going on to the site you reach a screen that states what Tidal is:

Again, that doesn’t really define much of what I’d possibly be paying $19.99/month for. You could “listen now” or enter a voucher which I’m curious to know what that is. Now when going to start a free trial there are two options, Tidal Premium ($9.99/month) and Tidal HiFi ($19.99/month). From the looks of it the only difference between the two seems to be the quality of sound. When asked (in an interview with NYU) if Tidal was competing with Spotify, Jay-Z commented:

I know everyone thinks “new company, main business competitor is Spotify” but we’re really not here to compete with anyone. We’re actually here to improve the landscape. If just the presence of TIDAL causes other companies to have better pay structure, or to pay more attention to it moving forward, then we’ve been successful in one way. So we don’t really view them as competitors. As the tide rises, all the boats rise.”

When asked who’d be McDonald’s or ShakeShack he responded:

“We’re cool with, you know, they [other streaming services] can be McDonald’s, we’ll be Shake Shack. We don’t have to be number one, we just want to be very specific and very great at what we do. We want to do a very specific thing, we want people to come to TIDAL for a specific sound, a specific experience, and to know that there are going to be the greatest new artists in the world, the biggest artists, introducing the newest artists, collaborations and things you’ve never seen before. That’s what we’re going to do. After that, the world decides. The universe decides.”

As for my thoughts on this whole Tidal movement, I’m not sold on this. I see this as just another music subscription service except with a punch. The punch is that the artists are behind it and paying subscribers can have access to exclusives such as the one released by Beyoncé. Also available on the site right now are exclusives from. I’m interested in seeing where this goes. This does go hand in hand with that of the Grammy Creators Alliance which wants artists to get the respect they deserve. Whether people subscribe or not, artists have joined together for their music to be respected.

One thought on “Tidal Launch”