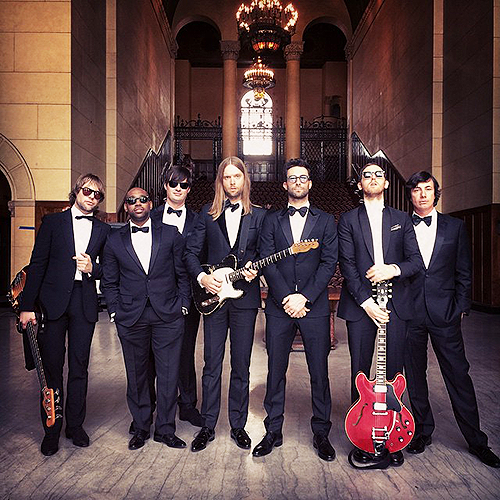 Maroon 5 has released the visual for their latest single ‘Sugar‘ and its not as grotesque as the previous two ‘Maps‘ and ‘Animals.’ I’m very happy with the approach of this one as its a more personal feel from the group.

It’s December 6, 2014. We’re gonna drive across L.A. and hit every wedding we possibly can. It’s gonna be awesome. And we’re late.

So as the group treks cross the city it’s interesting tow order just how many wedding would be featured in the video. Half o f the band splits up into two Cadillac’s while the set up crew gets into a van. Adam gets behind the wheel, drives off, let the music begin.

It looked like this could all be some type of horrible prank from the looks of the guests faces at wedding #1. This crew comes in and starts to quickly assemble this and that. It then shoots back to the band driving there and as they pull up Adam got out and looked hotter than ever. What I don’t get is how they walked in so discreetly without any one seeing. Clearly they must’ve been distracted by what was sitting on the dance floor. The couple looked confused and then as the hook dropped the curtain fell and their faces are priceless.

Moving on to wedding #2. This time they entered in through the kitchen. Another priceless look on the cooks face. A pat on the back from Adam was just to show, “Yup. we’re real dude.” They enter in without being scene, the shot of their silhouettes was pretty cool. The hook drops and BOOM another surprised couple. The husband looked more surprised than the wife in this one.

As the song is getting closer to the end, they are back to driving, there’s pictures along the way from fans that spot them, and then they hit quite a bit of wedding in the end of the video. I counted an additional 5 weddings. If Maroon 5 were to show up at my wedding I would say “What the f*ck” as well. The video ends with the repetition of the hook, confetti, and the the band driving off. Mission accomplished.

The overall goal of this video was not only to crash as many weddings as possible, but to shock the hell out of people as well. That was quite a daunting task to set up and deconstruct that as many times as they did. Kudos to the crew.

It would’ve been cute if there were clips added from his wedding. Might seem a little bit cliche, but hey it would’ve went with the theme. Maroon 5 is on a role with the videos. I really hope that my favorite from the album, ‘Feeelig,’ gets a video.

Check out my review HERE of Maroon 5’s latest album, V, and check out the video below: