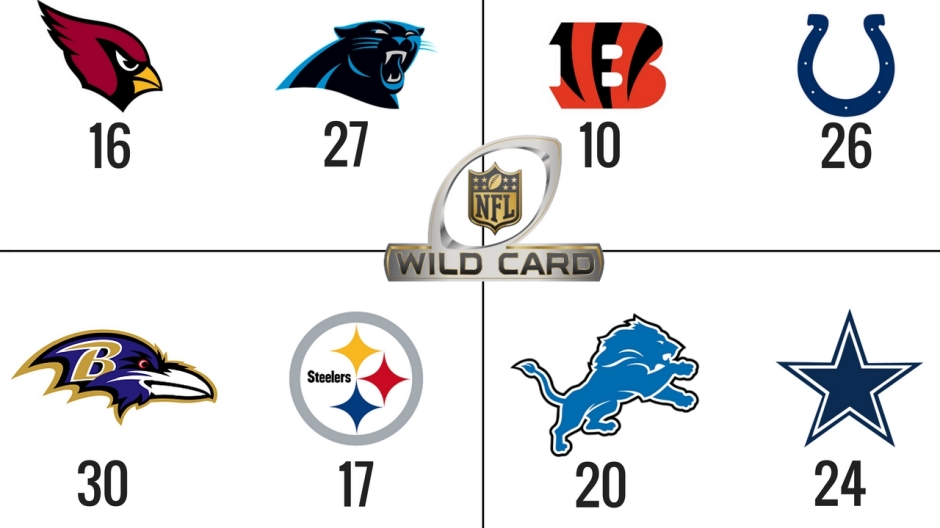 So the Wildcard games are officially over and here are the results:

My prediction for the first game, Cardinals v. Panthers was an upset. The Cardinals defense is really to blame for this. With a third string QB, the defense needed to step up more than what they did. They were sloppy which caused for penalties resulted in giving yards to the Panthers. The panthers had two HUGE back to back touch downs in the third which would knock the momentum of any team. Had the Cardinals played smarter and the defense stepped up knowing the offense wasn’t the healthiest, things could’ve ended differently.

The fumble in the 4th gave the team hope to get back to it, but then Lindley threw an interception to Kuechly. That sealed the deal. I stated in my previous post that the Cardinals main downfall would be the third string QB. While he was not as experienced as Palmer the game was just not a battle for the Cardinals. They were playing like it was a regular season game. That style of playing doesn’t win do or die games like the playoffs. Final score 27-16

So depressing to write that my team loss to the Ravens. Then again I am not surprised. The Steelers went in without Le’Veon Bell, the team MVP that carried the team and helped us get the 11-5 record we had. The game was a great one in the first half and then the Steelers starting falling a part after halftime. The defense was not explosive as it was in the last game and then the penalties started adding up. There was a hope when we got a touchdown, but instead of going for the kick and making it a 4 point game, the play was to do a 2 point conversion which was intercepted.

We had another chance to get a touchdown, but we were down 15 points. Ben got hurt, our backup QB surprised me and converted on a 4th down. Ben came back in and threw and interception. Game over. It was just not a great game for the Steelers and in playing like we did tonight there was no way we’d go on to beat the Broncos. It was a struggle to get through the season and even then we lost games we should’ve won such as to the _ and the Jets. An 11-5 season is nothing to ignore, but we have a lot of work to do as a team to have a chance of getting to the Super Bowl again. Final score 30-17.

I didn’t watch much of the Colts/Bengals or Lions/Cowboys. I was right in saying that the Colts would win. Final score of that one 26-10. I thought my prediction would be right with the Cowboys losing to the lions and I was ALMOST right UNTIL Romo threw the ball to Dez Bryant in the 4th quarter. The Lions had hope, but two fumbles ended their season. Final score, 24-20.

Here are my picks for the divisional round:

It’ll be interesting to see who comes out on top. Results and my thoughts will be posted next Sunday.