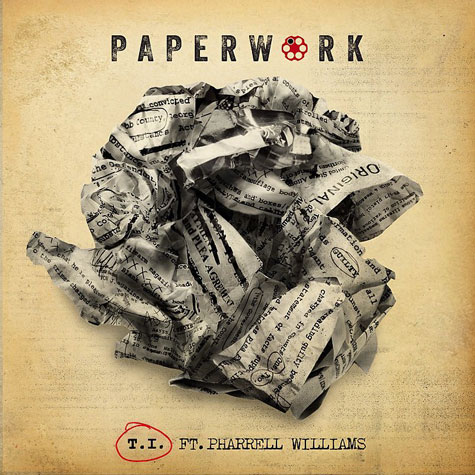 T.I. is back with yet another single off his upcoming album and this time it’s the self-titled track ‘Paperwork’ featuring Pharrell. He discussed the track in an interview with MTV News:

“…it pretty much kinda sums up the tone of the album. The cinematic presentation of it all. When you listen to the album, top to bottom, it kinda sounds like the score to a movie and I think ‘Paperwork’ is the perfect introduction to that.”

As a die hard T.I. fan I will not hesitate to say that I do not like the track. I would be sugar coating this review and being biased if I did not explain my true feelings about the track. Musically, it’s different from what T.I. usually releases, but he loves that kind of music so I’m not really surprised in that aspect. For those who have followed T.I.’s music, he’s no stranger to discussing the shortcoming in his life and on this track it is no different. The song sounded like it could’ve been a part of his debut movie, ATL. I’ve tried to play as if this is a great move for T.I. and find ways to like the track, but I’m really just not a fan of it. In knowing that Pharrelll would be producing I was expecting a harder more upbeat track from the two. I love T.I.’s songs with a message and I absolutely love his track ‘New National Anthem’ (CLICK HERE for that review), but this one not so much. It’s boring to me. In his description of the track yes I get the motion picture vibe of it, but it’s not my cup of tea. I’m a bit disappointed as I was anticipating something different.

Despite that, of course I WILL be buying the album because I’m a fan. For the most part everything I’ve heard so far I’ve pretty much enjoyed. Be on the lookout of rmy review. Paperwork IN STORES 10.21.14. Listen below: