The world of a celebrity is a gratifying yet invasive lifestyle. It’s great to have people screaming and cheering your name, but there’s also no privacy at all. It’s clear with the latest leaking of celeb nude pics that there is no privacy, but that one just takes the cake. Social media has evolved into this world that sucks you in and you can’t get enough. Everyone has an opinion. People leave filthy comments to celebs whether it be on Twitter or Instagram. Everyone has something to say. That was one of the reasons of why I started my blog, to voice my opinion. There’s also a way to do it and not be malicious. 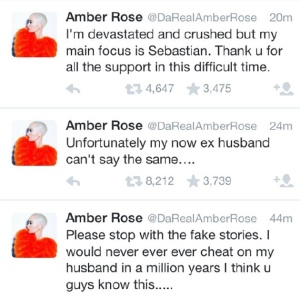 In the latest of celeb breakups, one of my fav couples was rumored to be getting a divorce, Wiz Khalifa and Amber Rose. I absolutely love the two of them together, but as much as I do I do not know their life. Fans and social media creepers know what is presented. They know what is glorified whether it be Wiz in a picture with a bong or another chick or Amber twerking. There’s always something wrong, always. Well as much as I hate for them to be over, Amber did release a statement via Twitter confirming that the TMZ rumors were true.

This leads to the topic and question, why can’t celebrity relationships last? There are two types of extremes of the relationships. There are the ones that get together really fast and they either take the step of getting married or they can’t get past the engagement before breaking up. Then there are those that stay together for 10+ years before breaking up. For instance, take Kris and Bruce Jenner. Most might say that the power and fame of KUWTK is what drove the two apart, but again we don’t know their lives. They could’ve been headed for divorce ages ago, but now that their youngest Kylie is 17 and she’s old enough to understand, they could just be going their separate ways.

As for the couples that get together without getting to really know each other is what baffles me. No, it’s true, we (as in social media stalkers) might not know how long people have known each other. Take Ciara and Future, he stated in an interview with Wendy Williams that they had met years ago, he just never pursued. Now here it is they have a gorgeous son, they were engaged, now they’re not engaged, they’re working things out. Who the hell knows.

Then you can take Tyga and his baby mother/ex-fiance, Blac Chyna. I though there relationship was cute, but when you look at how long they had known each other, along with how young each of them are, it’s no surprise that they’re no longer together. To make that situation any stickier they’re linking Tyga to Kylie Jenner and it’s even shadier if that story were true as Chyna & Kim K are “friends”.

Moving on and getting back to the question, it really all boils down to TIME spent together. I think in order for a relationship to grow and flourish there needs to be a strong foundation before jumping into marriage or kids. yes, there are relationships that have lasted with getting to know each other along the way, but Hollywood divorce has a track record. Does anything really last? Granted, blogs add fuel to the fire, but time is of the essence and these celebs do not waste time shacking up.

Putting time aside, fame and power really switch up a person and can turn a relationship that was great into something else. Take Robin Thicke & Paula Patton. They had been together since they were teenagers and while Robin was doing pretty well in the music scene, ‘Blurred Lines’ took it to another level. I knew that the ship was about to sink after that scandalous performance with Miley Cyrus at the 2013 VMAs. With success comes more time on the road, more exposure, and it can change a person. Look at Jordin Sparks and Jason Derulo. This is another case of fame possibly being taken to the head as Jason Derulo has been riding high with the success of ‘Talk Dirty’ and ‘Wiggle’.It was just announced that the two had broken up after 3 years of what the public deemed, pure bliss. They were just coupled up at the VMAs, but again WE DON’T KNOW (Kanye voice) their lives.

Hopefully fans will stop gawking over these celebrities and thinking that everything is perfect. The only thing a celebrity has over the next person is a bigger connect and (depending on who the celeb is) an even larger income. Other than that they’re regular people. Regular people love and leave on a daily basis. No surprise celebs do too.