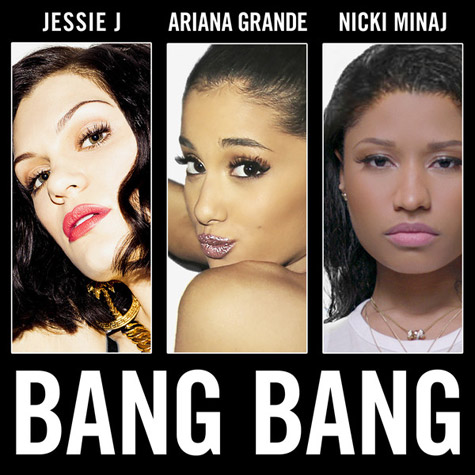 The track that has been buzzed about for a few weeks now has finally surfaced. Jessie J, Ariana Grande, and Nicki Minaj have teamed up for ‘Bang Bang’ and I must say that I had mixed reviews on the track once I heard the snippet. When listening to it in its entirety it’s a nice track that’ll get lots of airplay. Jessie J vocally is amazing and since I first heard ‘Price Tag’ I’ve been a fan of her work. As for Ariana Grande, while I usually can’t stand her voice, this time she fit well with this track. She was singing so high, which shows the strength and range in her voice, but other times she can sound very nasally. Now to complete trifecta, insert Nicki Minaj. Her bars were really nothing spectacular to me, but Nicki is Nicki and she’s quite clever. I will say that Nicki Minaj knows how to fit in on any track if need be.

I’ve been reading that this track is being compared to the mega diva smash, ‘Moulin Rouge’ (Christina Aguilera, Mya, Pink, Lil’Kim), BUT I have to disagree with that. Not saying that this won’t be a smash in its own right, but this song does not compare to ‘Moulin Rouge’. Another thing, I’m not really a fan of the cover art. It could’ve been way better. Jessie J confirmed yesterday (7.29) on Elvis Duran & The Morning Show (Z100) that filming for the video would be starting. Hopefully the visual doesn’t kill the song.