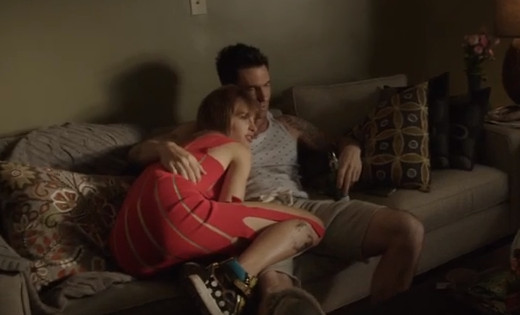 I’m still in love with the song and I didn’t even know that a video had been released and although it’s been roughly a week since it’s release (7.3.14), I thought that I’d still give my review.

Instantly when watching the video you can see that something is wrong as Adam Levine rushes into the hospital asking where the emergency room is. Excuse me, the emergency room. He races around and finds his girlfriend bloodied and heavily bruised in a hospital bed which looks like she’s been in a car accident based off the injuries. Time to backtrack in the video. Flashback to Adam dangerously weaving through cars as he arrives to the hospital. Flip the screen to his girlfriend.She’s walking down the street with a tear stained face,  when a drunk tries to touch and she pushes him off she stumbles into the street getting hit by a car. It’s clear to see she died instantly by the way her head violently hit the ground; very graphic.

Now switch back to how it all began, Adam went to a party with his girlfriend and they instantly get separated as soon as they come in. Insert members of Maroon 5. They’re both off talking to whoever when Adam heads to the kitchen, takes some shots, a girl feels all over him, and as she’s doing that of course his girlfriend would walk in and see it. As she leaves the house, Adam attempts to go after her yet he’s stopped by a friend.

The video ends with clips of all the scenes coming together, chronologically. It’s clear that a serious approach was taken with this one which I can appreciate because story lines in videos are  hard to come by. I see where they were going with this, I guess I just wasn’t expecting something so drastic as such.

With Adam’s movie debut, Begin Again, in theaters (7.11.14) this video was a great marketing way to show he could be serious and act. I’m interested in seeing the movie (but of course). The video overall was a great visual just it seemed a little too upbeat for the concept.