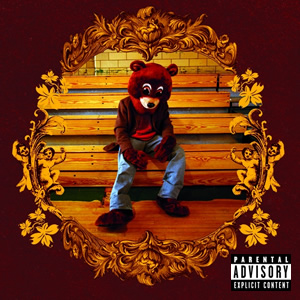 The Louis Vuitton backpack wearing producer by the name of Kanye West released his debut album, The College Dropout, on February 10, 2004. Who ever knew that he would be who he is today. With 7 albums (8 if you count Cruel Summer) and 21 Grammys under his belt there’s no denying that Kanye has become a musical genius in his own right.

The College Dropout was a recording process of 4 years and his first single, ‘Through The Wire,’ a Chaka Khan sample, was released in September of 2003. He followed up with hits ‘Slow Jamz’ (with Twista & Jamie Foxx), ‘All Falls Down,’ ‘Jesus Walks,’ and ‘The New Workout Plan.’

It has been named by Time and Rolling Stone as one of the best albums of all time. It’s also his best selling album with 3.1 million sold in the states and over 4 million sold worldwide.

He received 10 Grammy nominations at the 47Annual show (2005) and won _ of those two of which were for Best Rap Album and Best Rap Song, ‘Jesus Walks.’

As for the sound of Kanye over the years he’s always been an artist to push limits and has been a controversial figure for years. People have their negative thoughts about Kanye, but I respect the fact that he just does not care what people think. Yes at times he should think before he speaks in public settings, but as an artist its a shame that those two side of him conflict with each other.

As for Kanye’s work post-The College Dropout my favorites are a tie between Graduation and Yeezus. If I had to pick ONE of those I’d go with Graduation.

Here’s my top 5 from Kanye’s, The College Dropout:

Yes two of those tracks aren’t ‘songs,’ but Kanye’s skits throughout the whole album (and his future albums) is as real as it gets. To be a recent college grad it’s like you went to school to get a degree, but now you have nothing to show for your ‘success’ and you’re working under someone who never went to college. Oh the circle of life. 10 years later I see and can understand why it’s album is a staple for any Hip-Hop head and beyond.

One thought on “MMF Flashback — Kanye West, The College Dropout”