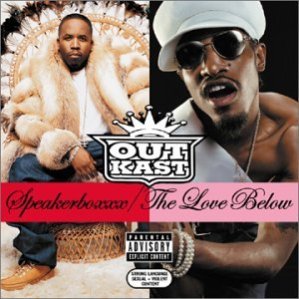 On February 8, 2004, Outkast won Album of the Year at the 46th Annual Grammy Awards making their album, Speakerboxxx/The Love Below, the second hip-hop album to win in that category. Here is their acceptance speech for that award:

Speakerboxxx/The Love Below was released as a dual album on, September 23,2003, and featured hits ‘The Way You Move’ and ‘Hey Ya!’ The album was an interesting release showcasing Big Boi and Andre 3000 as solo artists for the first time in their careers.  The album has gone on to be certified diamond and 11 times platinum by the RIAA. At the 46th Annual Grammy Awards (2004) three out of its six nominations. In addition to winning Album of the Year the album also won Best Rap Album and Best Urban/Alternative Performance for ‘Hey Ya!’

Here’s the Grammy performance of ‘Hey Ya’:

Outkast went on to release a movie and album of the same name Idlewild which had a similar set up to Speakerboxxx/The Love Below. They took somewhat of a break after that and Big Boi went on to release two solo albums, Sir Lucious Left Foot: The Son of Chico Dusty (2010) and Vicious Lies and Dangerous Rumors (2012), while Andre 3000 went to do features no tracks with artists such as: Ke$ha, Rick Ross, T.I., and countless others.

This year not only marks 10 years since their big win at the Grammys, but also 20 years since the release of their album, Southernplayalisticadillacmuzik (1994). They will be headlining both Gov Ball (NYC) and Coachella (Cali) this year along with other festivals along the way. No word on new music yet, but I’ll be waiting.

One thought on “MMF Celebrates Black History in Music, Feb. 8”