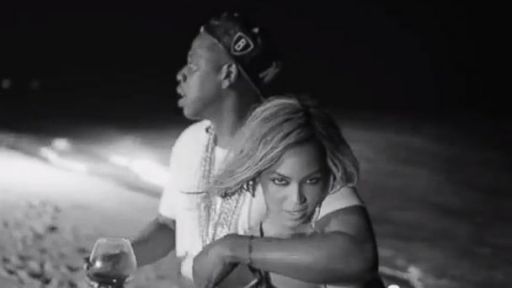 Beyoncé has been getting a lot of flack about the lyrics to her new self-titled album and it doesn’t seem to be stopping. UK radio station, Bang Radio, has banned a part of Jay Z’s lyrics from ‘Drunk In Love’ for domestic violence. What type of domestic violence did he insinuate?

That is one of the prolific scenes from the Tina Turner biopic starring Angela Basset. Bang Radio’s CEO, Jennifer Ogle, released a statement:

The lyrics controversially imitate a scene of severe domestic violence within the film, displaying promotion of domestic violence against women. In this light Bang [refuses] to play the song lyrics from henceforth on our station. We believe in the unity of women and music and in no way condone violence, domestic or otherwise, especially not through the power of music. Therefore, the decision has been made to wipe the stated lyrics from the song … Respectful of what our audience [wants] to hear on Bang Radio, we feel this is the right action to take in regards to the controversial lyrics of the song and we will continue to serve in social equality for people through music and content on our station.

From the first half of the statement it said that the song would no longer be played, but near the end the decision was changed to the song being played with the lyrics removed. This could be done one of two ways. Jay Z’s lyrics could be removed from the song entirely or his lyrics can still be played just removing the part insinuating domestic violence with some looping. I really would have thought that the song would get banned for the sexual innuendos instead of the domestic violence insinuation that clearly went over my head.

The song is doing very well on the charts ranking in the top 5 on the R&B/Hip-Hop charts. The album itself is holding on at #2 on the Billboard 200.

Well if you would like to keep up the Carters you can catch them (including Baby Blue) all over the blogs and Beyoncé’s Instagram. The couple is also slated to perform at the Grammy’s this Sunday (1/26/14).

Happy mail on unhappy days...
All things @capitolchicdesigns this week ✨
Today’s essentials ✨
Busy yet productive Saturday. Ready to enjoy the rest of my afternoon couch surfing with my snacks, remote, & Tik Tok.
Staying hydrated.⁣ Minding my business.⁣ Working on my craft.⁣ Repeat.
Loving this new mini sticker book from @sofabulously_creative’s ‘Pamper & Plan’ collection. Use my code LakFAB for 10% off 😉 #thankmelater
%d bloggers like this: